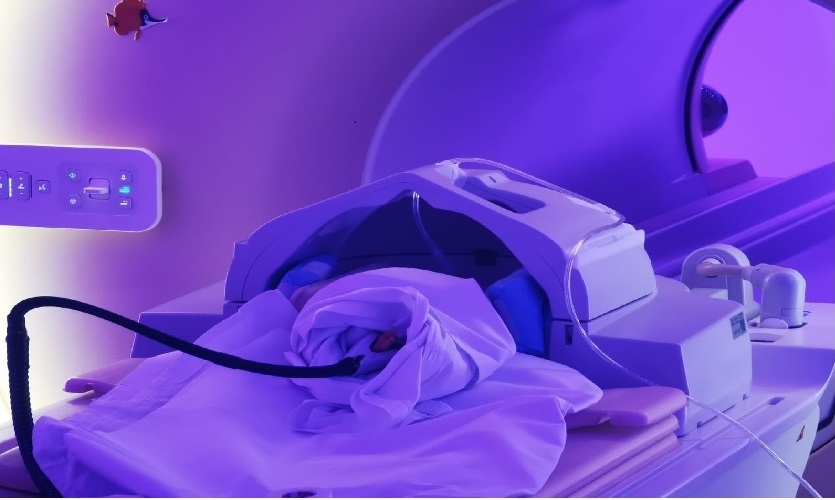 Birth is a fascinating adventure. Nonetheless, it is the first real challenge in life precisely because it may involve some dangers; perinatal asphyxia is one of these.

BUT WHAT IS PERINATAL ASPHYXIA?

It could be defined as a serious complication in the foetal-to-neonatal transition, whereby baby’s vital activities are inefficient. In these cases, the new-born doesn’t cry vigorously as it would in normal circumstances, it doesn’t breathe autonomously, its cardiac activity is inefficient (low or absent heart rate), its muscular tone is low (hypotonia), it doesn’t react neither to tactile stimuli, nor to procedural tests with nasogastric intubation.

HOW COMMON IS IT?

Perinatal asphyxia is a ubiquitous phenomenon: it can occur in every birthing-centre and it is, unfortunately, extremely unforeseeable.

The difficulties that affect foetal complications during labour stage are proceeded by a sentinel event (detachment of the placenta, umbilical cord prolapses, uterus rupture, etc.), which lead to inducing an emergency caesarean delivery are noticed only in 20-40% of perinatal asphyxia cases; on the contrary, problems are detected in a new-born only at the time of birth.

New-borns’ difficult circumstances are such that around 2-3% of worldwide infants (in western world, data relating to developing countries aren’t available but are suspected to be more) need “help” with resuscitation manoeuvres.

First, you must execute pulmonary ventilation with a mask. Often it isn’t enough to “resuscitate” the new-born; in other cases, it’s necessary to do more, from tracheal intubation (more or less, 1% of the cases) to heart massage. The most extreme cases involve the administration of life-saving drugs such as adrenaline.

WHAT ARE THE POSSIBLE RISKS?

Some babies born with these difficulties could develop a post-asphyxia syndrome, even if they are helped properly. It is an encephalopathy (a brain distress with clinical signs such as convulsions) that can be associated with significant long-term outcomes.

These disorders can be observed as the baby grows and range from an initial difficulty and inability to feed normally (they are not able to suck breast or feeding bottle) to epileptic disorders, to those in visual range (they don’t “engage” objects with their gaze, they don’t smile when they have a human face in front of them after the first two months of life but they come to do so much later).

Equally significant are mobility problems, which are becoming increasingly obvious and evident with the growth of the child, even for non-medicals (in medical terms, they develop an infantile cerebral palsy).

Finally, a series of cognitive deficits with more or less severe speech disorders are becoming increasingly prevalent, making the lives of these children very difficult, both for themselves and for those around them.

In the absence of sentinel events, which determine the need for an emergency caesarean delivery, the prediction of a difficult birth is only possible through the evaluation of the course of the heart rate (monitoring of the fetal heartbeat) of the fetus about to become a newborn.

It is extremely difficult to comprehend the fetus’s neurological suffering, still attached to the umbilical cord and within the birth canal, observing the only course of its heart rate, especially because this interpretation is not always so trivial.

IS IT POSSIBLE TO FORSEE A “DIFFICULT BIRTH”?

The assessment of heart rate is quite clear and unquestionable only when the heart path is at the extremes of a spectrum of possibilities, i.e. when it indicates a clearly normal course, in medical terms “physiological” (with a comforting variability) or when it is evidently pathological (e.g. when serious bradycardias appear in the presence or not of a uterine contraction).

On the other hand, the majority of babies born with asphyxia are characterized by a heart tracing in which fetal heartbeat pattern has no easy nor unique interpretation, an heart-rate defined as “worrisome” and today more aseptically defined as “type 2” to differentiate it from the physiological one (type 1) and from the pathological one (type 3).

Type 2 tracing does not require, nor does it suggest, to have to perform an emergency caesarean delivery, unlike with the type 3.

Knowing and constantly studying these aspects can encourage a greater development and medical research during this tortuous chapter as it relates to birth quality. Every civil society would and should guarantee it in the best way possible.